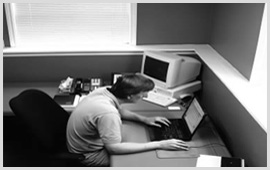 Private Investigators UK can ensure you the best possibility of your earning potential and staff productivity through the Employee Monitoring services. It is very difficult for the owner of a small or medium sized company to monitor all the activities of the workers.

It is also quite impossible for him to look after the productivity of the company when he is out of the town or remains busy for the company works or meeting. You can’t be sure what your employees are doing in this period of time. Our private detectives can help you in all these regards.

Our private detectives and investigators are highly qualified in employee monitoring as they have the long 25 years of experience and knowledge in helping business to monitor employees or workers. For these services our private detectives in UK provide covert CCTV camera installation and listening devices. These services can be exposed directly or can be kept hidden to monitor the activities of the workers. Our experienced private investigators are very apt to carry out these services.

The registrar of a public university contacted our Private Investigators UK office for a serious issue. He informed our private eye in UK that his employees were not working according to the schedule provided by the authority. Rather they idly pass away their time by gossiping or doing nothing at all. The students of this renowned university complained several times about them in the administrative office but the workers denied the fact. One of the students complained to them for not carrying out an urgent task and from then on they punished him by doing nothing for him that he asked. They also behaved in a rude way with him.

Our private investigators in UK took the matter very seriously and our private eye asked the client if he wanted a covert or overt service. The registrar wanted to punish those workers for the negligence of their work. He preferred exposed service to covert. Our private detectives in UK also informed him to tell them about the installation of the CCTV covert camera in the office. Our client did the same and he informed all the workers in a group e-mail about the installation of the camera. But at first the workers maintained the working schedule and the productivity increased a lot. But few days later the situation became the same. Then our private detectives marked those workers and submitted the result to our client.

Our tensed client became very pleased with the result. He at once called for an emergency meeting with those employees. He asked them for an explanation. But they didn’t accept the accusation at first. When the proof of their activities was brought out before them, they became silent and admitted the accusation. The registrar then sacked those workers from their works and thus exemplified the example. He thanked us a lot for the services provided by our private agency in UK.